The 22 Malaysian players will have their work cut out for them when they take to court in the Celcom Axiata Malaysia Open (CAMO) 2020 slated for 31 March to 5 April in Axiata Arena.

Leading the challenge for Malaysia is none other than men’s singles Lee Zii Jia, ranked 15th in the world ahead of sixth seed Christie Jonathan from Indonesia.

Soniia Cheah, who is Malaysia’s sole representative in the women's singles, will face have to raise her game in front of the home fans when she takes on Chinese Taipei’s Tai Tzu Ying, who is also the tournament second seed.

Aaron Chia-Soh Wooi Yik will lead Malaysia’s challenge alongside three other pairs in the men’s doubles.

Seeded eighth, Aaron and Wooi Yik has been drawn against India's Attri Manu-Reddy B Sumeeth in the first round.

Ong Yew Sin-Teo Ee Yi is unlikely to have any obstacle getting into the second round when they square up against another Indian duo, Satwiksairaj Rankireddy-Chirag Shetty.

On the other hand, Malaysia’s professional pair Goh V Shem-Tan Wee Kiong, who have been ranked third, will need to pull out all the stops when they face defending champion Jun Hui-Liu Yu Chen in the first round. 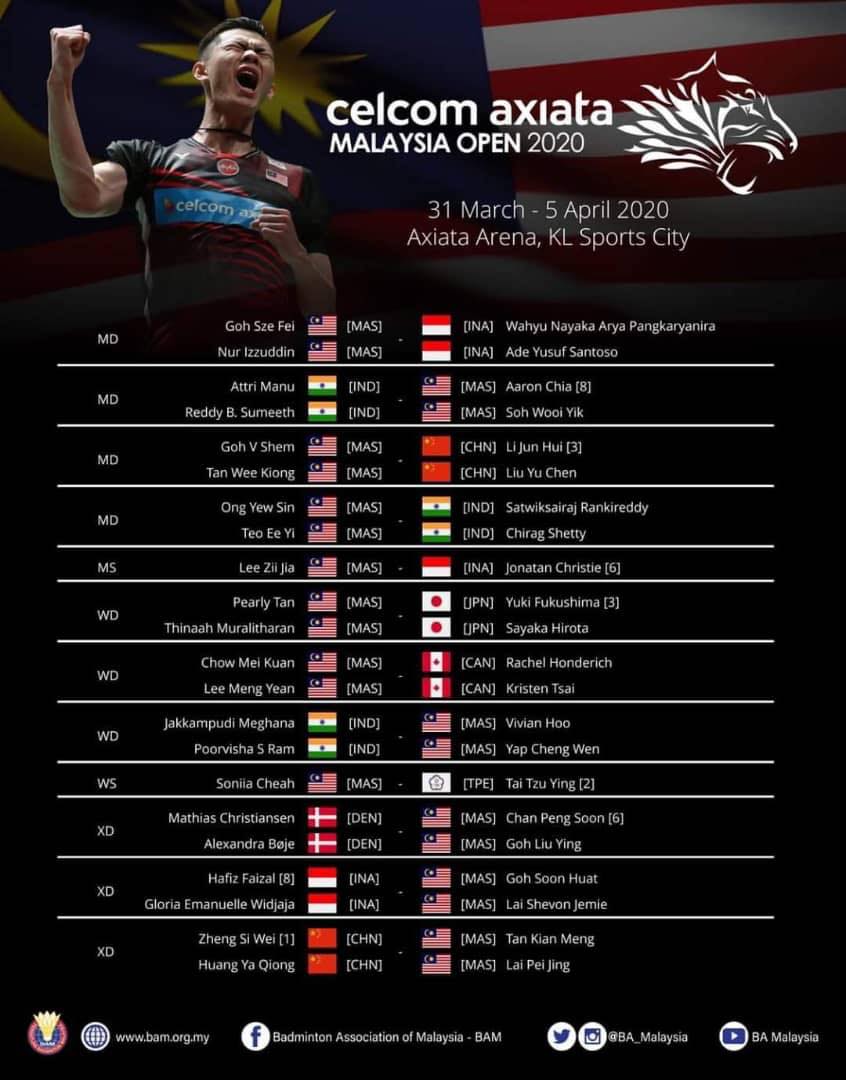 In the women's doubles, Malaysia will have three pairs to carry the nation’s challenge with Vivian Hoo-Yap Cheng Wen leading the charge against India’s Jakkampudi Meghana-Poorvisha S Ram.

Chow Mei Kuan-Lee Meng Yean will have to overcome the obstacle from Rachel Honderich-Kristen Tsai of Denmark if they are to make it to the second round.

Young pair in the making Pearly Tan-M Thinaah, will be tested against third seed and 2017 winner Yuki Fukushima-Sayaka Hirota of Japan.

In the mixed doubles, Malaysia’s famous duo of Chan Peng Soon-Goh Liu Ying will face off against Denmark's Mathias Christiansen-Alexandra Bøje while Tan Kian Meng-Lai Pei Jing will have to produce their best when they take on two-time champions also top seed Zheng Si Wei-Huang Ya Qiong of China.

Get your tickets at https://myticket.asia/